If you feel a duty to avoid “group think” and are not yet a subscriber, I recommend you take a look at this group and their blog:  Minimally Disruptive Medicine.   Today’s posting (What are the risks and benefits of adopting guideline-driven care?)  refers to a remarkable blind spot in thinking that has just begun to be revealed:   the faulty belief that one size fits all in treatment which is based on the assumption that mathematical averages are “good enough” to PRECISELY  describe the care a whole population should receive.   And there’s a link to a VERY COOL Air Force study about “average” pilots that led to a new approach to designing cockpits for them.

Interestingly, a neuroscience researcher brought up this exact problem of variability while discussing neuroplasticity and its application to rehabilitation after strokes in a YouTube I watched last night.    https://www.youtube.com/watch?v=LNHBMFCzznE.  She uses the phrase “personalized medicine”.    The genetics-oriented medical community uses the phrase “precision medicine.”   The bottom line:  people are not biologically identical at birth – and their life experiences after birth only INCREASE that variability.

The definition of evidence-based medicine (EBM) proposed by Dr. David Sackett, one of the original gurus who articulated the concept, DID include patient values and preferences.  (See diagram pasted below and this website:   http://guides.mclibrary.duke.edu/c.php?g=158201&p=1036021.) 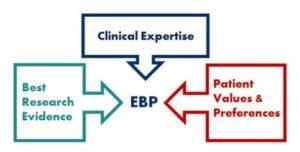 Note however that the Sackett definition FAILS to mention variations among patients – their biological idiosyncracies, other co-morbidities, or the context of the illness:  the patients’ life situations.   Technically, one could argue the nature and impact of those variations are all included in the box called Best Research Evidence.   BUT REALISTICALLY, as applied in practice and on the go, the “research” being brought to bear is usually mono-dimensional (the research on a particular test or treatment regimen).

A very bright and ambitious young Air Force physician told me last year that most of the fun is gone from medical practice for him due to EBM and EHRs (electronic health records).  By fun, he meant intellectual challenge and creativity.   In his world, going along with whatever the practice guideline says to do is the easy path.  There is neither encouragement nor reward for taking the extra mental step to consider whether there any reason why a patient might need something else –in addition or instead.   If he deviates from a guideline, he has to spend MANY more clicks and MUCH more  (bureaucratic) time documenting the reason for it.   He has already become cynical and is looking for an alternative to clinical practice.    Apparently the idea of mastering a “population approach” – seeing if he CAN consistently apply EBM across all of his panel of patients  – has little appeal for him.

Definitely a worthy bleeding edge of medical thought.    EBM conscientiously and consistently – but injudiciously – applied by clinical lemmings (imagine little white coats) may help many patients — but will definitely HARM some.