I was first bewildered then honored to be invited to a White House reception on July 20 to commemorate the 25th anniversary of the ADA.   The invitation was completely unexpected.  It  arrived by email and in the sender field was “The White House”.  I actually wondered for a moment whether it was spam!  I couldn’t figure out HOW my name had gotten on the list — but I went, of course!   It was certainly an experience to remember.  Here are four of my favorite moments.

1.  Meeting former Senator Lowell Weicker and his wife — and the surprising result of my little good deed

When the man in the wheelchair to whom I had just introduced myself said that he was former Senator Lowell Weicker (from Connecticut), I asked him why he was here.  He said, “I wrote the ADA.”   Some web research after we got home confirmed that fact:  an ADA Legacy website calls him the “Father of the ADA.” He left the Senate before the significantly amended bill he had originated could be enacted into law.  Senator Weicker also said that writing the ADA was one of the two things that he was most proud of in his entire Senate career.   It was especially poignant to hear this from an 84 year old man in a wheelchair, clearly looking back over his life. 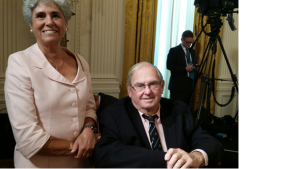 About a half hour later, when President Obama started  his remarks, he began by acknowledging the contribution that had been made by various influential ADA big wigs in the room.  Sadly, he never mentioned Senator Weicker.

The next day, I screwed up my courage and sent an email to the White House.  I addressed it to the person who had confirmed our RSVP and arranged our security certification.  Maria’s signature read Associate Director, White House Office of Public Engagement.   The heart of my message read: “I presume that others have alerted you to this issue already, but I believe the President delivered an unintended insult by omission yesterday.   I certainly hope that he apologizes to former Senator Lowell Weicker of Connecticut for failing to publicly acknowledge his presence at the ADA reception yesterday and his enormous contribution as “father” of the original bill that became the ADA.    Personally, I hadn’t been aware of the role Senator Weicker had played, but I just happened to strike up a conversation with him at the event.”

To my ASTONISHMENT, Maria CALLED ME UP a few hours later!  She said they were going to have the President write a letter – and then we had a great chat.  It turns out she is the White House Disability Liaison!   She confirmed that they got my name from the Acting Assistant Secretary of Labor Jennifer Sheehy, in part due to my presentations about the work disability prevention model in various DC forums, and my participation in the Stay-at-Work & Return-to-Work Policy Collaborative sponsored by DOL’s Office of Disability Employment Policy.  Maria also said that they make sure to include some future-oriented people in nostalgic events like anniversaries.  I was finally reassured – my invitation wasn’t a mistake!   And now someone in the actual WHITE HOUSE has heard about our exciting ideas about preventing needless work disability!

2.  Here’s proof that medicine was a better career choice for me than photo-journalism

The crowd started gathering to hear the President speak. I decided to avoid the crowd. I stationed myself to catch a close glimpse of him as he was escorted swiftly out of a private corridor into the East Room.  In the excitement, here’s the best / only photo I got– the backs of the heads of the President and Vice-President!   (By the way, as they walked out, I was suddenly reminded that even super powerful people are plain old human beings. For example, their bodies do not glow, have
no visible aura or anything – and there’s no awesome sound track.) 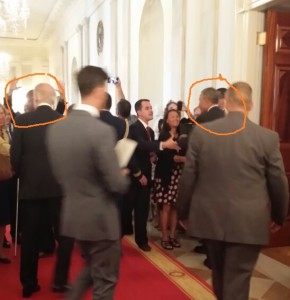 3.  The ADA has transformed lives of people with disabilities — but not everywhere

When it came time for the President to speak, he was introduced by a lively young women from Harvard Law School who is both deaf AND blind. She reminded us that much of the world has no ADA. Her African grandmother has been astonished at what has been possible for her here in the US, since no-one in Africa could imagine such a future for a child like her. She also said that at the beginning, Harvard didn’t know if and how they could accommodate her, but that they were willing to see if they could do it together. Now THAT is the attitude I wish we would hear from more employers! 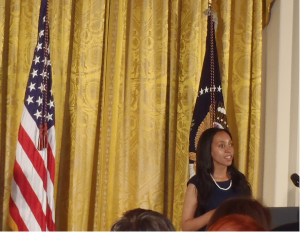 4.   Looking back while leaving to savor the beauty.

On the walk back down the long hall  to the East Wing exit where we had come in, I snapped a photo of the garden, looking back towards the main White House.  I never dreamed that the most memorable thing about the White House would be its classic beauty.  To my eye, the style of the place evokes the noble yet practical-minded men who founded this country. It also evokes the Age of Enlightenment and the ideas about what it is possible for human beings to be and to become that undergird and sustain this fragile compact with one another that we call a nation. I feel very happy to be part of this continuing American “experiment”. 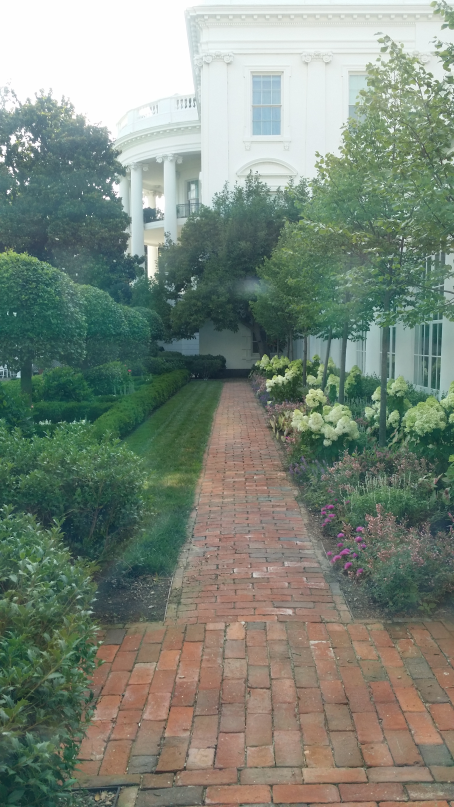